About
Small Biz Mac, This blog focuses on using Mac as the foundation of a small business--the operating platform, the market, and more. This blog will discuss both the challenges of operating a business on Mac hardware and software, and the impact of the broader Mac market on business.

Subscribe to RSS Feed
Get a syndicated feed of this weblog.


During the summer of 1999, I worked for a large manufacturing publisher here in Cincinnati. When my older son was born, I was able to work from home and extend my maternity leave. I had a nice work area in my dining room and a fast computer, printer, desktop scanner, and a rock-solid modem. All that I lacked was a high-speed internet connection. When Zoomtown DSL service became available for my subdivision that fall, we quickly had it installed. It was high-speed copper line Internet. In other words, this was Plain Old Telephone Service (POTS) wrapped in modern DSL. Everything was plugged into a socket, and there was no “wi-fi” nor did we have websites. This new Internet service was going to transform my small book-distribution company into a going concern.

Fast-forward to 2016. My side hustle had grown into a thriving business with several websites. Cincinnati Bell came through the neighborhood and offered Fioptics, and our subdivision would have an ultra-high speed glass line run to each home. This was called Fiber-to-the-Home, or FTTH. We declined, however, as CB didn’t offer a static IP address, which was necessary for our business. Also, we found it hard to give up our landline, which was still functional in the event of a power outage. Fioptics was not.

In the meantime, we moved our dozen websites to GoDaddy after Apple discontinued its server platform. As an added benefit, when the Cincinnati Bell network went down, our websites were still up.

In 2019, Cincinnati Bell notified us that they were going to finally cut our copper wires. We were the last home in the subdivision to have glass installed. (By that time CB could accommodate a static IP address.) We quickly became accustomed to the lightning-fast speed of our FTTH connection for our home and the reliability of the GoDaddy platform with its static IP address and email. Cincinnati Bell also became known as AltaFiber.

In October 2022, GoDaddy began migrating its email to Microsoft 365, so we began exploring other providers as the cost would greatly increase. That platform was a virtual private network (VPN) hosted in the US Virgin Islands. On January 1, 2023, we moved our website hosting from GoDaddy to the VPN.

On the morning of Saturday, January 14, the VPN crashed and our websites plus our company email went dark. We spent hours online with their tech support to no avail but we still had working home Internet and email through AltaFiber. On Sunday afternoon we were still offline, but we connected with AltaFiber in an online chat. A technician would come on January 17 to configure our CB-supplied router with a static IP address so we could continue hosting our own websites. The VPN charged us $80 for a year of Static IP address service, but it had failed. We would use AltaFiber’s Static IP address “bolt-on” service for $30 each month.

The technician came as promised on Tuesday afternoon and worked for four-and-a-half hours to configure our router with the AltaFiber system. He spent a long time on the phone with HQ, as a co-worker at the office near our home had not previously configured our ip address as was the intended plan. We had also wanted the connection from the router to our new Mac Mini server to be wireless; however, a Category 6 ethernet cable was used to make the connection. Using a cable provided an advantage in that we could save the wi-fi to run our in-office webservers.

Though we are not using our VPN for its intended purpose, we are using it for our in-office network. We have a little pureVPN icon on our laptops to connect to the VPN system, so we can view our own websites away from the AltaFiber network on our own wi-fi connection.

We are still using MaraDNS to give our domain name to the outside world. Puck is still our backup. We use lighttpd as it is similar to the old Apache web server. Maddy is our email mail service that handles both SMTP and IMAP.

Those twenty-odd years ago I never would have dreamed that we’d have more than a dozen websites, including SmallBizMac. A high-baud modem running on POTS was the best of that era. Now we are using a static IP address running on fiber via an ethernet cable so we can keep our outside network on the outside and keep our inside network running wirelessly in the office.

Below is a photo showing a Category 6 ethernet cable running from the CB-supplied router to our Mac Mini server. 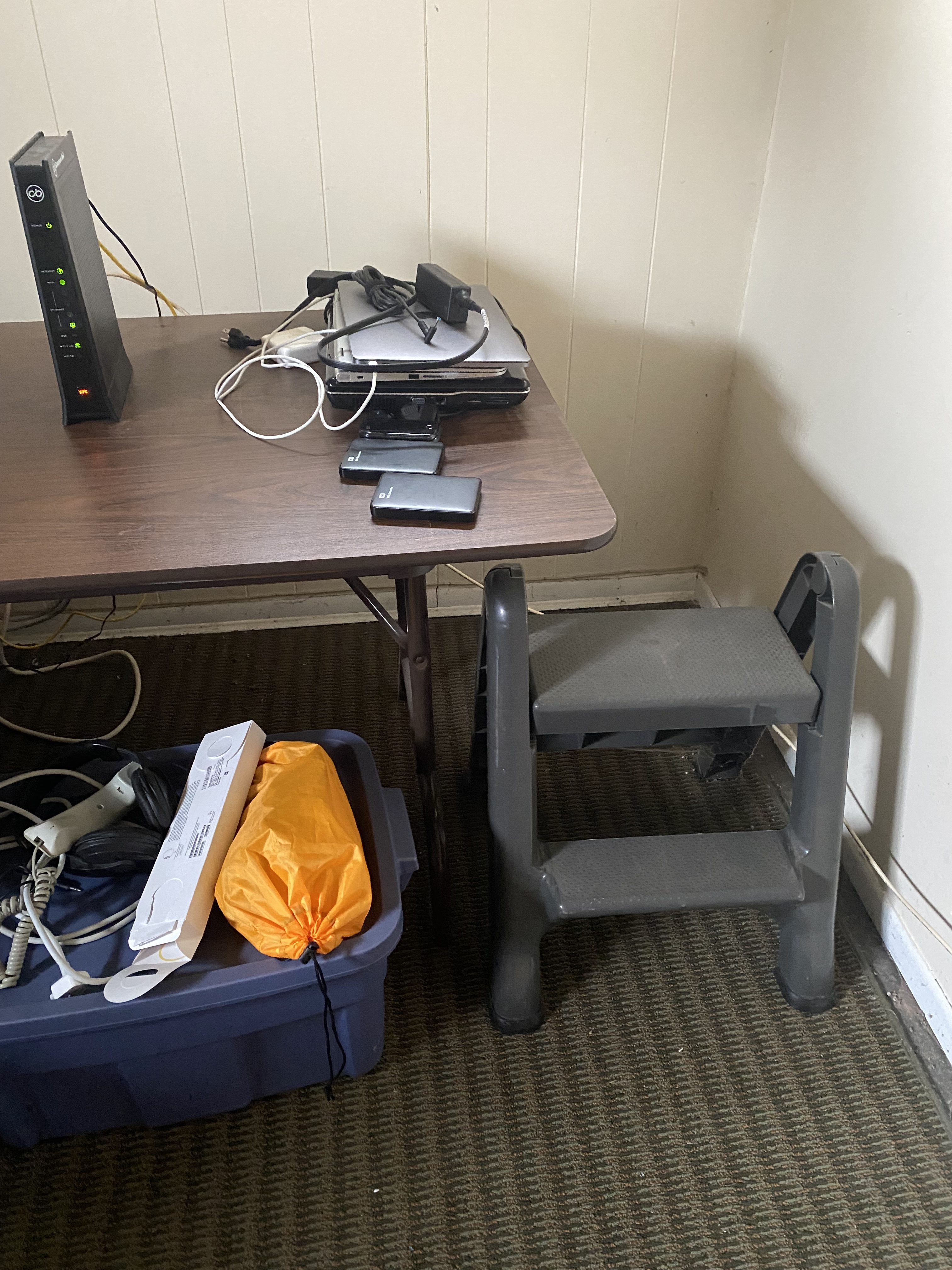 Our VPN was up for about two weeks and then it failed. We are now going with Cincinnati Bell/altafiber Static IP address.